Posted at 07:09h in Stories by john.thorpe

Bella was 18 months old when her mum Jo-Ann noticed she was starting to become clingy. Jo-Ann thought it was due to the fact that Bella’s sister, Grace, had just been born and they were in a new place – visiting grandparents in Ballarat.

Then Jo-Ann noticed Bella didn’t like walking and was starting to get bruises on her legs and spine. After several trips to a GP and a paediatrician, the family were rapidly on a plane back to Sydney where Bella was admitted to Sydney Children’s Hospital, Randwick and diagnosed with a rare cancer; Philadelphia chromosome-positive acute lymphoblastic leukaemia.

What began was a two year journey to rid Bella’s little body of the cancer. Her treatment included chemotherapy, total body irradiation and a Bone Marrow Transplant – she underwent more than 30 general anaesthetics during her time in the Hospital. She was the first child to be treated at SCH with a new drug, Imatinib, which directly targeted the Philadelphia chromosome protein. At the time this was an experimental strategy but is now proven best practice.

“Over the two years, we were in Hospital on and off constantly and due to the drugs Bella was taking she was more prone to infections, we were always in isolation,” Jo-Ann said.

Eventually Bella was announced to be in remission and became the first patient at Sydney Children’s Hospital, Randwick to be successfully treated for Philadelphia chromosome-positive acute lymphoblastic leukaemia.

Now a bubbly seven-year-old, Bella will be five years in remission 13 June 2013, a milestone for anyone treated for cancer and the point at which the cancer is unlikely to return. 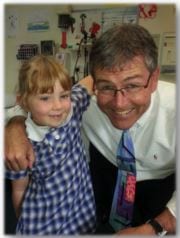 “We feel great, we feel fantastic. Once she was one year post transplant, that was really good, but five years is the magic mark,” Jo-Ann said.

“Bella loves going to the Hospital, she feels like a bit of a rockstar when she goes and it doesn’t seem to hold any bad memories for her at all.”

“She’s at school in year one and full of bravado and a bit cheeky, she’s just happy; you wouldn’t know a thing was ever wrong with her, she’s just a normal child.”