Posted at 07:18h in Stories by john.thorpe

It happened just before my 10th birthday, I had just started playing soccer and I was so excited. I had a very sore knee – I saw the doctor and then the physio and I had an X-ray. I went to a specialist at The Royal Children’s Hospital in Melbourne and had more scans and a biopsy near my knee. I didn’t understand why they told me to rest and stay off my leg.

My parents knew that I had been diagnosed with Osteosarcoma but didn’t tell me until a few days after my birthday when we went back to the hospital to meet my oncology team. They explained that I was sick and needed medicine but I didn’t understand what they were saying. My mum told me outside that I had cancer and I would lose my hair … I began to cry.

One week later I was back at hospital to have my port put in, they also tried to put a stomach peg in but they couldn’t. They gave me my first round of chemo. It was horrible as I felt so sick and had to stay in hospital for several days.

After my third round of chemo I started to lose my hair, which made me cry. I had another operation to put my stomach peg in, which was used to feed me overnight as I was hardly eating, and to give me medicine. Every time I had medicine through my mouth I vomited. 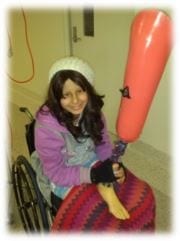 The chemo made me very sick, upset and also angry. I would get really bad ulcers in my mouth and high temperatures which meant I would spend more time back in hospital which made me really sad.

I had six rounds of chemo before my surgery, I knew something bad was going to happen but I would block everything out and not talk about it. I knew I was going to lose my leg!

After my surgery they amputated my right leg straight through the knee, I woke up from surgery and had nerve damage in my left leg. It was really painful; I could feel my left foot and half of my leg. I would get sharp stabbing pains which made me scream all night and I didn’t get much sleep.

After my surgery I had 12 more rounds of chemo and another 6 months in and out of hospital. I became really sick again from the chemo, spending more time in hospital. Sometimes I needed blood transfusions. I was also having overnight feeds through my stomach peg.

This was so Yuk! I would wake up in the morning and always vomit. I was having physio but hated it so much because it was so painful! I finished my chemo before Christmas in December 2013. 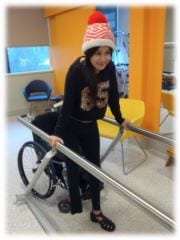 On Christmas Eve my oncologist told me I need more operations on my lungs but again I blocked this out and didn’t want to think about it. Early this year I had four more operations at The Royal Children’s Hospital, they took out two more lesions in my lungs, they took out my stomach peg and they also had to close the wound on my stump. I also started having intravenous immunoglobulin treatment every month which is for my nerve damage. I still have this treatment which has helped me so much. I do a lot of physio outside of the hospital. I have a prosthetic leg and I had to learn how to walk … they are now making me a new leg as I have grown so much.

Every day when I wake up and look at my stump it will always remind me that I had cancer! But I’m a lucky one as I am still here!!!

Australian Lions Childhood Cancer Research Foundation supports the clinical research salary of Dr Michael Sullivan, Head of Solid Tumours/Neuro-oncology at The Royal Children’s Hospital, Melbourne who is building a portfolio of clinical trials in solid tumours such as osteosarcoma


Help us achieve our vision.
You can help us reach our goal of helping to create a 100% survival rate for children with cancer.
GET INVOLVED