Posted at 00:22h in Stories by john.thorpe 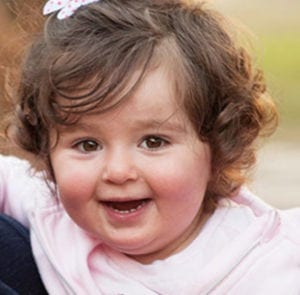 ELLIE’S STORY: FROM INTENSIVE CARE TO THE PLAYGROUND

For little Ellie and her family, a cancer diagnosis came out of the blue when she was just eleven months old. Now Ellie has just turned two – and she’s an active, boisterous toddler. Her story underscores the power of the Zero Childhood Cancer program to improve outcomes for kids with cancer in Australia, and even save lives.

Ellie has just turned 2, and she’s an active, boisterous toddler

The power of genomic information in childhood cancer

Through the Lions Kids Cancer Genome Project (Genome Power),Garvan and Lions are bringing the power of whole genome sequencing to Zero Childhood Cancer. Together, they are sequencing and analysing the tumour and normal genomes of children enrolled in Zero Childhood Cancer. This means that they read the entire DNA sequence (over 6 billion DNA bases, or letters) of each child’s tumour, and compare it to DNA sequence from elsewhere in the body, to gain vital clues about how the tumour has developed and what drives it.

Whole genome sequencing has been a crucial part of Ellie’s journey with the Zero Childhood Cancer program (see below). Through whole genome sequencing, Garvan researchers were able to identify the genetic change that was likely to be critical in driving her cancer’s growth.

Ellie’s story: uncovering what made her tumour tick

Ayear after the world-first Zero Childhood Cancer national clinical trial was opened, almost 130 children with serious and aggressive cancers have been enrolled on this state-of-the-art personalised medicine clinical trial that aims to give them the best possible chance of survival and quality of life.

One of those children is Ellie.

Ellie was just eleven months old when she was admitted to the Sydney Children’s Hospital, Randwick having been unwell for just a couple of weeks. A scan revealed a tumour so large in her chest it was pushing her heart to the right side of her chest. Within days, Ellie was in the Intensive Care Unit, on life support, because her little lungs could no longer help her to breathe unaided. The tumour – sarcoma – was aggressive, rare and resistant to chemotherapy.

Ellie was immediately enrolled onto the Zero Childhood Cancer Program, which meant her tumour biopsy was subjected to detailed genetic analysis, with the Zero team working around the clock to get results as soon as possible, as Ellie’s condition was critical.

Whole genome sequencing performed through the Lions Kids Cancer Genome Project identified Ellie’s cancer as infantile fibrosarcoma with a rare ‘translocation’ – a reorganisation of DNA – that was likely to be critical in driving her cancer’s growth.

Crucially, the research and clinical teams had recently learnt about a new drug developed by the US company Loxo Oncology, that targeted the exact translocation now identified in Ellie’s tumour. Loxo Oncology agreed to provide the drug on compassionate grounds, so treatment could begin.

Within four weeks, Ellie’s cancer had shrunk to a point where Ellie was off life support and could breathe on her own. And six weeks later, she was home.

As Mina, Ellie’s mother explains, “We were told to think about saying goodbye, she was so sick we didn’t even know if she would reach her first birthday. Now today to be celebrating her second birthday, when she is such an active, boisterous and energetic two-year-old is beyond our wildest dreams. We can’t thank the teams at the children’s hospital and research institute enough.”

Ellie’s story: a new approach made available to others

A clinical trial of larotrectinib, the drug used to treat Ellie, is now open in Australia for all children whose cancer is identified by the Zero Childhood Cancer program as having this same genetic change as Ellie’s cancer. This means that these children will have access to this targeted therapy, which appears to be both more effective and far less toxic than standard chemotherapy.

A year of Zero Childhood Cancer

One year since its launch, Zero Childhood Cancer has produced some remarkable results for children like Ellie. Childhood cancer is extremely complex, meaning this kind of ‘evidence-based miracle’ will not be possible immediately for every child. However, the more that is understood about what drives the growth of childhood cancers and the more drugs that are developed to combat these drivers, the greater number of children with remarkable success stories like Ellie’s are likely in the future.

In summary, here are key outcomes of Zero Childhood Cancer in the past year:

“Every Child deserves a chance at a healthy life”