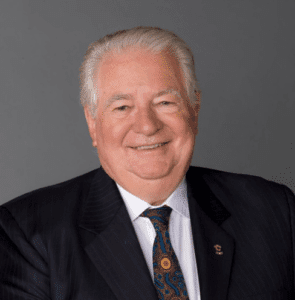 The Barry J Palmer Fellow recognises outstanding support for Australian Lions Childhood Cancer Research Foundation’s vision of 100% survival for kids with cancer. A recipient of this fellowship will be recognised for being one of our ambassadors helping kids fulfil their right to a healthy life. 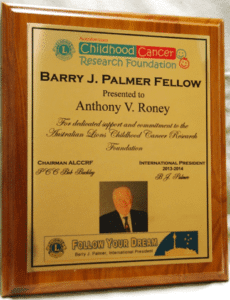 International President 2013 – 2014 Barry Palmer, of Berowra, NSW, Australia, was elected to serve as International President of The International Association of Lions Clubs at the association’s 96th International Convention, held in Hamburg, 2013. In 2009 Barry was instrumental in MD201’s national convention in Melbourne approving the establishment of ALCCRF. Barry was a founding trustee of ALCCRF and remains an enthusiastic supporter of the work ALCCRF undertakes to fund impactful world class research into childhood cancers.

The beautiful timber used to mount this fellowship is Acacia melanoxylon, commonly known as the Australian Blackwood.  The Acacia species is native in eastern Australia with this particular specimen coming from Tasmania.  Tasmania is often referred to as the “Island of Inspiration”, owing to its large and relatively unspoiled natural environment.